If you want to read the first chapter of Filthy Beast, you’ve come to the right place! 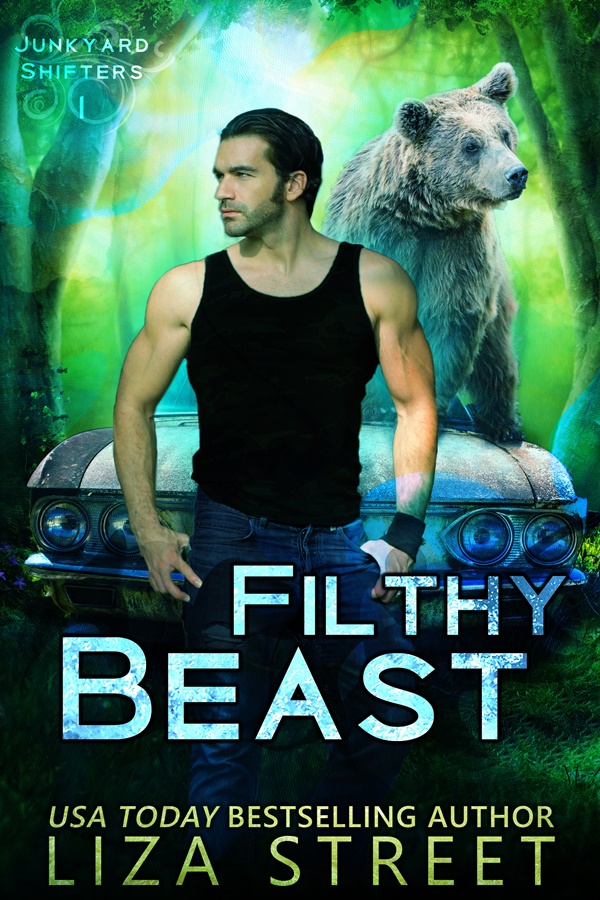 Grief was tangible. It had a weight to it. It pulled Lena down, made it hard for her to breathe.

Sari had been dead for two weeks, and Lena didn’t feel the grief abating. Something small, like catching a whiff of Sari’s scent, set it off anew. Or like now, seeing an envelope addressed to Lena in Sari’s writing. Sari had a funny way of making her letter A’s. They were always rounded and happy. On the front of the envelope, the A at the end of Lena’s name still carried the buoyancy of life.

The pride’s mansion was quiet. Shaw, the alpha and Sari’s mate, demanded silence to mourn Sari’s death. Yet Lena didn’t sense any sadness in him. He had been entirely uninterested in going through Sari’s things, which was why Lena did the job now. She was alone in Sari’s room and Sari’s scent was everywhere. Dusty, feline. Family. The last of what Lena had.

And that newly-familiar ache of grief wrapped around her now.

With shaking hands, she opened the envelope.

Lena sucked in a breath. How could Sari have known she was going to die? Her death had been a sudden accident, a fall during a pride run.

Nothing I do for Shaw is right. He’s crazy. Violent, aggressive. I can’t give him babies, and I think he’ll end up killing me. If he does, you need to get out. He’s obsessed with our family, our bloodline.

Lena sat back on her heels. What the fuck?

She stared at the paper in her hands. Sari had seemed so happy. She had been the perfect alpha’s mate. She had hosted pride meetings, stood tall at Shaw’s side, smiled prettily at everyone. Her perfection had actually started to get on Lena’s nerves.

It had been a mask? Faked?

Lena’s heart pounded double-time. She could leave this place forever, sure. Easily. Nothing held her here now that Sari was gone. She’d grab some clothes, quit her waitressing job, and start a new life somewhere. She could find another pride to take her in, and maybe, someday, heal from Sari’s death.

She stood on legs that felt weak. There was no time to waste. Her poker face sucked, and if Shaw saw her in this moment, he might realize she knew something.

Footsteps came up the stairs. Before Lena could reach Sari’s door, one of her pride mates appeared. Brenna. Short brown hair, golden brown eyes. Attitude for days. She was Shaw’s only female enforcer.

“Shaw wants to see you.” Brenna’s voice was snotty. She was close to Lena’s age. Lena used to try to be her friend, but Brenna had never allowed it.

Lena walked to Sari’s desk and set the letter down as if it didn’t belong to her, as if it wasn’t important. “I’ll be down in a second.”

When she could no longer hear Brenna’s footsteps, Lena folded the letter and tucked it into her back pocket. Then she followed Brenna downstairs.

A few members of the pride sat around, lounging on couches or sitting on the floor and leaning against furniture. Brenna was among them, her golden brown eyes looking from Shaw to Lena and back again.

“Lena, welcome,” Shaw said. His dark, shoulder-length hair was tied back. His well-trimmed beard below his narrow nose used to strike her as regal.

“Thank you.” Lena wanted to spit in his regal face. No, she wanted to claw off his face. He stood there with that benign smile after he had hurt her sister?

She had to keep it together. After this, she’d go upstairs and pack her bag, and then she’d disappear.

Shaw cleared his throat. “I require a new mate.”

“So soon?” Lena couldn’t stop the words, and she realized her mistake as soon as she spoke them. Shaw did not like to be questioned.

“It isn’t natural for an alpha to be alone,” he said. “I treasured Sari. Ours was a perfect match. And now you, Lena, are without a sister. I am without a mate. I’ve thought it over, and you shall be my mate.”

He beckoned her forward. Lena’s feet obeyed. Just get through this. Then do as Sari said—run.

The alpha’s touch on her cheek made Lena shudder. Cold. Hard. Violent, even when it was the barest brush of skin.

Several of his enforcers sat around the meeting room. To an outsider, they’d look as if they were simply relaxing, but Lena could sense their attention. Each of these cougar shifters would be ready to leap to the alpha’s defense. An attacker wouldn’t have time to blink.

She dared to look into Shaw’s eyes. The golden yellow was beloved by most of the cougar shifters in their pride—it was a sign of royalty, as far as they were concerned.

Lena’s eyes were blue. Why would he want such a low-born lion for his mate, anyway? Sari had said something about their bloodline.

As if sensing her question, he said, “I like your spirit; it runs in your family. You’d do well at my side.”

His golden eyes flashed and his jaw tightened. “You will be my mate.”

Hyper-conscious of the others in the room and their faked inattention, Lena whispered, “No. Never.”

“How dare you refuse the position of alpha’s mate?” Brenna pointed an accusing finger at Lena. “You’re nothing but a bitch who doesn’t deserve him.”

“Brenna, enough,” Shaw said, but his gaze never left Lena’s face. “This is your last chance. Your actions these last two weeks would be enough to land you in the Junkyard, should you continue to defy me.”

Inwardly, Lena winced. He wasn’t wrong. She’d disobeyed the alpha’s order time and time again over the past week. Staying out late, returning to the territory with whiskey on her breath. Fighting with her pride mates. To everyone else, it would look as if Lena was out of control. In truth, though, she’d been reeling from Sari’s death.

Something hadn’t added up. Now Lena knew why.

The letter was safely in her back pocket, proclaiming the truth.

He’s obsessed with our family, our bloodline.

Now Lena was seeing it, right here in front of her. A proposal to mate from a man who was so powerful, he didn’t believe a woman would say no.

“You disgust me,” Lena said.

He spat in her face, the warm spray hitting her nose and mouth. She fought the urge to gag.

“Take her away,” Shaw said.

Brenna and another pride mate, Dillon, jumped up to do his bidding.

“Where to?” Dillon asked.

“Holding pen in the basement. She’ll go to the Junkyard tomorrow. Hutchins is sending along a transport.”

Shaw wouldn’t have known about the transport unless he’d asked around—it wasn’t like the Junkyard transports were advertised. Which meant he’d guessed Lena would say no to his proposal.

If he suspected she knew about Sari, he wouldn’t let her live for long.

“This is your last chance, Lena,” Shaw said in a growl. He faced away from her, his fists clenched at his sides. “Is this really the choice you want to make?”

“If my choice is between you and the Junkyard,” Lena said in a cold, clear voice, “then I choose the Junkyard.”

Brenna’s fingers dug into Lena’s arm. Dillon held her more loosely. Still, there was no escaping their grasp. Even if she could tear away from these two, she wouldn’t get far. This mansion was full of cougar shifters who supported Shaw. He was everything to them.

She wondered whether any of them knew the truth about Sari. Probably some of them did, and didn’t care.

Three metal cages loomed side by side. Each one was tall enough for a person to stand in, wide enough someone could lie down.

Brenna let go of Lena with one hand so she could open a cage door. Lena took advantage of the brief distraction, pulled loose from Dillon’s grasp, and shot a right hook straight at Brenna’s nose.

“You fucking bitch!” Brenna shouted. Blood immediately started streaming from her nostrils. She hit Lena just as hard, clipping her cheek before pulling her fist back to hit Lena again. “I’ll fucking kill you!”

Dillon turned Lena away from Brenna. He grabbed both of Lena’s arms and held them behind her back. Over his shoulder, he said, “Just open the cage, Brenna.”

Lena twisted in Dillon’s grasp to watch what Brenna did next.

Brenna looked like she was going to stay and shout more obscenities at Lena, but Dillon said, “Go get your nose looked at before it heals crooked.”

Brenna’s vanity won the battle over her need for revenge, and she went upstairs.

The ache in Lena’s jaw had already begun to spread, creating the beginnings of a massive headache. She wondered why Dillon hadn’t left yet. Looking at him hard in the face, Lena spat, “What?”

“Just wondering why you slugged her. You knew it wasn’t going to help you get away.”

Because she’s a bitch. Because she’s too happy that I’m in here. Because I’ll never get another chance. “I wanted to make her bleed. Call it a parting gift.”

Dillon shrugged. “Just so you know, I think it’s messed up that Shaw put you in here.”

“But you’re not going to do anything about it,” Lena said.

Dicks like him let bad things happen every damn day. Lena shook her head and watched him disappear up the basement steps.

Sari had told her to run. She had told her to leave the pride. Getting sent to the Junkyard hadn’t factored into Lena’s plans, but she couldn’t deny that the result would be the same.

She smiled to herself, appreciating the pain in her cheek. She was getting away from Shaw.

Filthy Beast will be released on May 11th, 2020! Pre-order your copy for just 99 cents on Apple Books, B&N, Kobo, or Amazon! Click here for the universal link (which includes all stores and their countries). <3 The Google Play preorder is coming soon.