Filthy Cowboy is Book 4 in the Junkyard Shifters series! Click here for the series page. 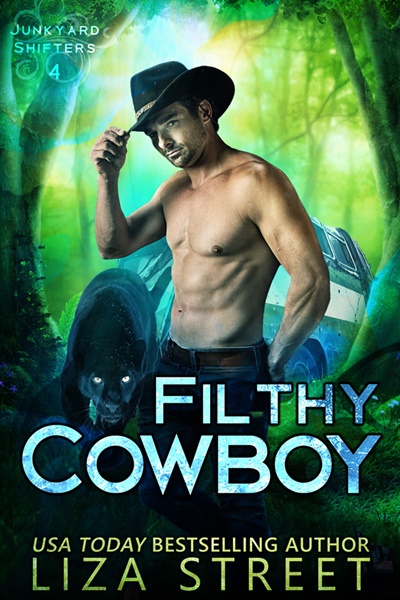 This jaguar shifter is used to denying himself…but when a sexy little librarian shows up, wanting to learn about love, he’s unable to resist.

Her heart thudded in her chest as she stepped closer. She didn’t believe for a second he wasn’t interested, not if the growing bulge in his jeans was any indication. She didn’t know much about sex, but she was pretty sure a boner was a sign of interest. It didn’t necessarily signify consent, of course, but she believed it indicated interest.

Or perhaps it was merely a physiological reaction to something unrelated. Like how her nipples got hard on cold mornings when she undressed for her shower, or when she sat too close to the air conditioning vent in the library basement.

“Dew,” he said, his voice low and rumbling.

And then her heart fell. “But all those poems you wrote. You talked about peaks and valleys, delights of skin and salt. Your taste will linger on my lips. Stetson, you wrote those things. To me! And now you’re saying you don’t want me?”

He turned his golden eyes to her then, and she saw the conflict raging within them. “I’m not saying I don’t want you, Dew. That would be a lie.”

He pushed forward from the old delivery van where he’d been leaning. She knew on an intellectual level that the men here were not human, and logic followed that Stetson, too, was not human. Heck, she’d seen a big old bear surrounded by a white light, and then a naked man had stood in its place.

And she’d felt the invisible wall with her own hands.

So she knew magic existed.

Stetson stopped two feet away from her. Twenty-four inches. She could reach forward and touch the sturdy build of his chest—she bet he’d be just as firm as that damn invisible wall.

He said, “Did Blythe and Jase tell you, yet, what this place is for?”

“It’s a prison,” Stetson said. “The wall is there for a reason—it’s to keep all us bad shifters from leaving.”

“But Jase and Blythe…” Dew began.

“They’re a different case.” Stetson shook his head. His eyes continued to blaze as he looked at her. “Why the fuck didn’t you listen when I told you to stop?”

She put her hands on her hips. “I’ve seen your verses, Stetson Krom, and I know you’re capable of better language. So use it.”

His lips twitched, and his darkly stubbled jaw dimpled. Then he restrained his features once more.

Dew held in a sigh. She’d been so close to seeing him smile. It grated on her nerves that the smile was nearly earned because he was laughing at her, but still, she wouldn’t mind seeing him grin.

He took another step forward, leaving only about six inches of space between them. She had to crane her neck to look into his face. His fingers were warm on her cheek as he brushed a lock of hair behind her ear.

“Dew,” he whispered, the syllable guttural. “You make me forget my words.”

The blazing gold of his eyes pinned her in place. She raised her hands to his waist, to yank him toward her, to ask wordlessly for the contact she craved.

But before she could even touch him, he was gone, and her fists closed on emptiness.

Stetson, a jaguar shifter, knows he’s exactly where he belongs: in the Junkyard, a place where all the bad shifters are sent. Reading books and fantasizing about the sweet librarian he’s never laid eyes on are his two main pleasures in life. But when Dew shows up, and his dangerous past returns to haunt him, he’ll have to shrug off his quiet, bookish ways and resurrect the beast inside of him in order to save his mate.