Let’s catch all those sexy foxes!

Fox shifters have been on my mind lately, with the publication of Ruthless Misfit and with Ruthless Outlaw coming out next month! The heroines in those two books, Erena and Margot are sisters who are both fox shifters. I don’t see them too often in PNR, so I hit up my author friends to share their books with me. Now we’ve got a nice crowd of foxes all in one spot. 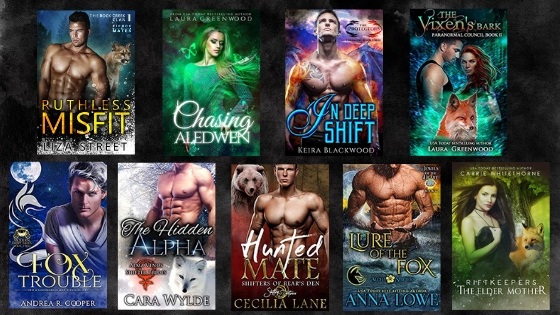 A mountain lion shifter with a giant secret and a love-burned fox shifter must reconcile the wrongs of their past to overcome the current dangers threatening their clan—otherwise, he’s in danger of losing his mate before he even gets a chance with her.

The Fae Princess of Spring has lost her magic. But with the help of fox shifter twins, Cyprus and Brandon, maybe she can change that.

In Deep Shift, by Keira Blackwood

She stole my wallet–and my heart.

The Vixen’s Bark, by Laura Greenwood

All Ari wants is to make a difference, and her seat on the Shifter Council means she can do that. Only thing is that she’ll have to give it up if she accepts her mate.

The Hidden Alpha, by Cara Wylde

Seth of Clan Sylfur is in search of a bride for his future Alpha. Roman Sylfur, the Alpha of the most powerful fox clan in the world, is dying, and his son, Blake, will soon take his place. The second he sees Amelia, Seth knows she is the perfect woman… for him, not for Blake.

Becca’s been to hell and back and got the t-shirt, thank you very much. After experiencing a tragic loss and the abandonment of her mate, she left Bearden and vowed never to return. Only, fate had a different plan in mind.

Lure of the Fox, by Anna Lowe

Destiny only puts events into motion. The rest is up to you.

The Elder Mother, by Carrie Whitethorne

Over six thousand years ago, a demon took Seren’s life. Now known as the Elder Mother, she exists to take theirs. Her return to Earth marks a tipping of the scale – demons are no longer predators, but prey.

I hope you’ve found some yummy new fox shifter PNR to read! If we’ve missed one of your favorites, feel free to write it in the comments. <3 Ruthless Outlaw, my second fox shifter book, is up for pre-order. It’ll be out on March 12th–you can find all the retailer links here.