Filthy Vandal is out now! This is a prequel novella to the Junkyard Shifters series, but it’s a complete story and stands alone. It introduces the Junkyard and features Grant and Caitlyn. <3 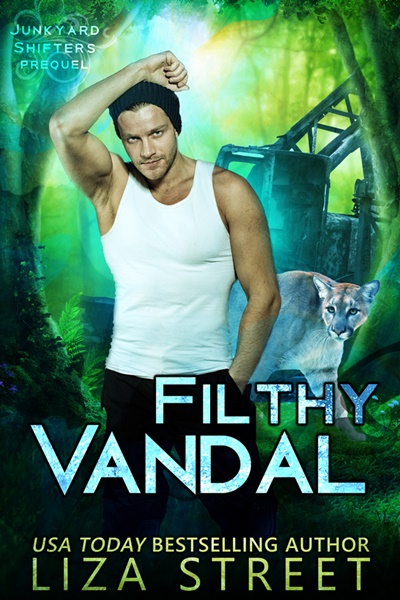 “The shoulder is fine,” he said, taking in her appearance. Something about his gaze caused little flickers of pleasure in her belly. He didn’t leer at her like the other guys had done. “You’re looking better.”

See, the fake smile had worked. “Thanks. But your shoulder?”

“No, I should’ve tended to it yesterday, but let me take a look now.” She’d been selfishly involved in her own struggles and completely ignored there was an injured person right in front of her. If the wound got infected, how would they treat it? It wasn’t like they could rush to the hospital.

He lifted up his sleeve. “It’s already gone, see?”

His muscular bicep was distracting and entirely unscathed. Maybe she’d mixed up which arm had been hurt. “Show me your other one.”

Grinning, he turned and lifted his other sleeve. More tanned skin covering perfect muscles. Not even a scar in sight.

“I told you about magic.” His voice was quiet, his green eyes guarded.

“Magic healed you?” She reached tentatively toward his arm. When he didn’t draw back, she smoothed her palm over his skin.

The contact made her breath catch in her throat and she yanked her hand away. A feeling. More than a feeling—a need. It swirled through her lower abdomen, gathering heat.

“What…?” She looked into his eyes.

He looked nearly as surprised as she felt. “What did you just do?”

“I don’t know. Nothing.” Her heart pounded away in her chest, double-time. She would probably break the blood pressure machine she’d used to monitor her aunt’s declining health if she were to hook herself up to it right now. Holding her hand out once more, she said, a half-smile on her face, “Can I touch you again? For science?”

He snickered, which gave her a jolt of pleasure. She liked amusing him, apparently, although she had no idea why.

“I am a nurse,” she murmured. “I worked in a hospital and everything.” Reaching out again, she touched his upper arm. Again, that feeling of need and desire flowed through her veins.

Grant nodded, as if a question had been answered, but she didn’t remember asking him one.

She held out her arm. Instead of running his palm over it like she’d expected, he grabbed her and yanked her into his lap. She let out a shout of surprise.

“No, you just manhandled me, you big brute.” But strangely, she didn’t mind. Both of his hands were on his arms, gliding over her skin, igniting that warm feeling of need in her once again.